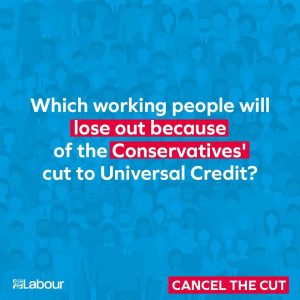 Today the Conservatives will slash Universal Credit for 5826 in the High Peak, with new analysis revealing the cut will leave families £220 worse off by Christmas.

The Universal Credit cut comes in on Wednesday 6 October, leaving recipients facing 11 weeks of reduced support before December 25th. The cut comes amid a wider squeeze for working families including rising energy prices, the proposed National Insurance hike and widespread fears that the Conservatives plan to raise council tax to fund its social care commitments.

“Working families in the High Peak are taking an absolute battering from the Conservatives. Higher tax, lower support and rising energy prices – this is a perfect storm and local families are being abandoned by this Tory Government just when they need them most.

“Ministers like to pretend that this crisis won’t hit families hard but the truth is that those on Universal Credit will be down £220 by Christmas alone – that’s more than half the average family Christmas budget.

“People in the High Peak need real support, but all they get from this Conservative government are empty slogans and a cost of living crisis that could ruin Christmas. High Peak deserves better.”