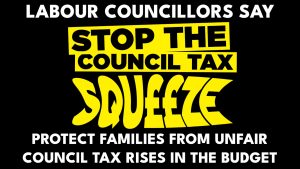 High Peak Labour Councillors are backing a nationwide campaign to STOP THE SQUEEZE – to demand an end to unfair council tax rises in next week’s Budget.

The move comes after a punishing few weeks which has already left families hundreds of pounds worse off thanks to an Autumn triple whammy – the hike in National Insurance, higher energy prices and a £1,000 cut to Universal credit.

The Conservatives have hugely reduced core funding to councils, forcing councils to raise council tax to try and fill some of the gap. Since 2010 core funding for councils has reduced by £16bn, but council tax bills have been forced up by £10bn.

Launching the campaign, which will see Labour Councillors from across the country deliver a petition to Downing Street next week,

“Enough is enough. Here in the High Peak, household budgets are being squeezed to bursting by sky-high energy bills, the £20 a week cut to Universal Credit and the new Tory tax hike on National Insurance. People can’t take any more.”

“Thanks to the Conservatives, council tax bills have increased more than £220 since 2019, the year that Boris Johnson became Prime Minister. Yet incredibly the Tories want to hammer working families again – at the worst possible time.”

“We do everything we can to stretch budgets further, but government cuts to funding mean that Councils are forced to make millions in savings. They expect us to put council tax up to fill the gaps their funding cuts create.

“The Prime Minister and Chancellor must Stop The Squeeze on families in High Peak by funding local services properly and ruling out further unfair council tax rises in this year’s Budget.”